AsemconnectVietnam -  The 30th Southeast Asian Games (SEA Games 30) in the Philippines ended with a spectacular music and light feast-inspired closing ceremony, and the official flag handover to Vietnam – the host of the 2021 event.

The athletes parade kick-started the festivities, as competitors from the various nations took centre-stage.

A drone show then turned the inky black sky into a stunning screen showcasing the different sports contested at the Games. The captivating showcase then culminated in the display of the Games theme: We Win As One.

Philippine surfer Roger Casugay received the fair play award for his act of bravery in saving other athlete in the midst of a competition round. 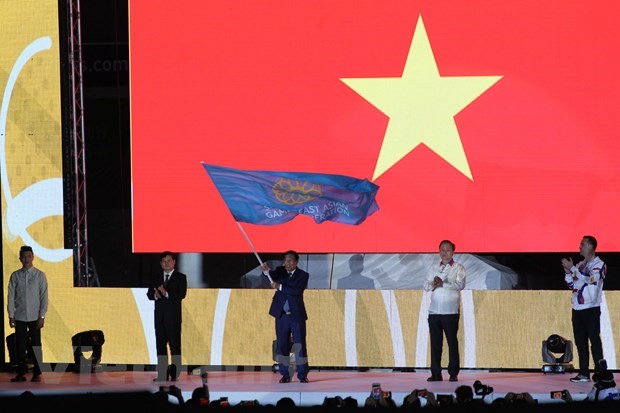 SEA Games flag is handed over to Vietnam. (Photo: VNA)

The SEA Games flag was then handed over to Vietnam, who will host SEA Games 31 in 2021.

Ministry of Agriculture and Rural Development

Ministry of Planning and Investment

Contribute to increasing the value of Vietnam National Brand on average of 20% per year according to statistics and assessments of ...

Directive on solutions to promote growth and sustainable ...

Implementation plan of the Prime Minister Decision No. ...

Traditional cultural activities will be hosted by the Dinh Lang Viet (Vietnamese Communal House) group and the Hanoi Old Quarter ...

Chinh among players to look out for at AFC U23 champs

More than 3,000 runners to run trails of Moc Chau